Has this ever happened to you? A few days ago while I was cooking I switched on the microwave and got a bit of a shock. I quickly removed my hand. My son was standing behind me and asked me what happened.

I told him I had saltwater on my fingers, and when I came in contact with electricity it gave me a small instant shock because of improper earthing. I wondered if I would be able to explain to my son the answer to the question: does salt water conduct electricity? The short answer is YES, it does. But how to explain the concept to a child?

After all, terms like electricity and conduction were all new to him. Therefore I thought: what a great opportunity to teach an important science concept! I told him that we would do a small activity to answer all his questions, and he got all excited. Kids love science experiments.

The Concept Of Electricity

Electricity is a balanced flow of electrically charged particles through a body. It is a form of energy produced due to the flow of electrons.

An electrical current can be a result of two reasons: a flow of electrons (such as in metals) or ionization (such as in saltwater). Ionization is a process in which electrically neutral molecules split into charged ions in a solution. These ions flow in a closed circuit, creating an electric current.

Salt Water As An Electricity Conductor

Pure water is not a conductor of electricity. A small amount of current can move through the water, but it is not an active conductor.

However, water with salt mixed in is an excellent conductor of electricity. Table salt (Sodium Chloride, chemically written as NaCl) molecules consists of two atoms: Sodium and Chlorine.

How Is This Electric Current Created?

Salt dissolves in water because the (covalent) bonds in a water molecule are stronger than those in the ionic salt molecules. This process causes salt to ionize when added to water. As the electric source comes in contact with salt water, the sodium ions and chloride ions present in saltwater create a current.

The ions form a link between the sodium ions that absorb electrons from the negative terminal and pass them to chlorine ions on the positive terminal. This flow creates a current in the water.

The process of salt becoming ionized in water is known as electrolysis, and we call the resulting solution an electrolyte.

You might have heard of athletes and sportspersons drinking electrolyte solutions. You’ve probably seen commercials for sports drinks emphasizing electrolytes. Electrolytes are important for us regular folk. They help regulate many aspects of our body, such as how our nerves and muscles function. It is very important to maintain the right balance of electrolytes in our body for us to function properly. 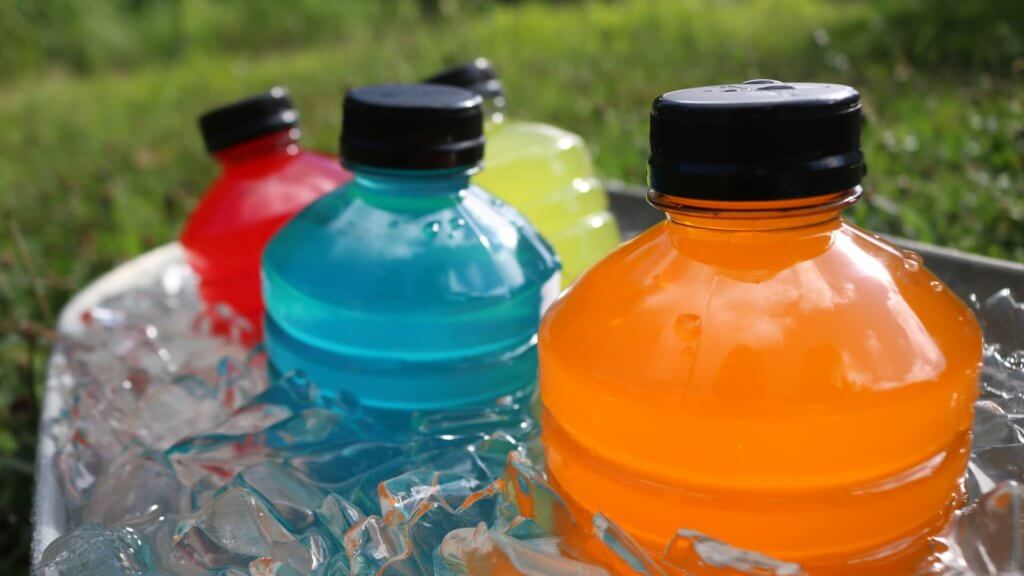 Back to Our Experiment

We began to prepare for our exciting experiment, a ‘Salt Water Circuit.’ I told my son to collect a few things in our home and I acquired the other necessities from a nearby grocery store.

Note: You should only conduct this experiment under adult supervision.

To begin our experiment, we should first create a bulb circuit with the above material.

This part of the experiment is to make sure that our self-created circuit works. Once you are sure of that, you can continue with the next part of the saltwater experiment.

Here’s how to begin the main experiment with saltwater.

When we used pure water there were no ions, so electricity could not travel from one electrode to the other.

When we mixed salt into the water, the bulb lit up as the sodium and chlorine ions created an electric current from one electrode to another.

You can try mixing more salt, and you will notice that the bulb becomes a bit brighter. Another cool way to do this experiment is with a buzzer instead of a bulb. Kids love it when the buzzer rings!

I hope you and your kids loved this easy activity that explains an important concept of physics and chemistry.

An activity helps a child to grasp a scientific concept through its application. Learning theory in a book is one thing, but watching it with your own eyes is exciting, and leaves a more lasting impact. Your child will always remember the experiment and it will help them to understand the concept.

How To Build An Electric Circuit