You see, scientists believe that our world that we see today in all its glory, planets, stars, and even galaxies, all started from a single point, before which there was nothing.

About 13,800,000,000 years ago (have fun counting the zeros!), there was nothing but a tiny, hot, and concentrated point (much smaller than even a pinhead). Then, an explosion happened, which created matter, space, time, and energy.

Everything we see today came from these fundamental things; this explosion created our entire universe. Scientists have dubbed this as the “Big Bang.”

Why Is It Called the Big Bang?

Funnily enough, the name “Big Bang” was given to mock the theory proposed by Georges Lemaître, a Belgian scientist and priest in 1931. In 1949, when another scientist, Fred Hoyle, who believed in a different idea of how the universe started, mocked this theory on public radio by using the words “Big Bang” to say how silly it sounded (source).

However, as time went by, a lot of evidence came along, which showed that Lemaître was probably right. Today, everyone accepts that the “Big Bang” theory is the best answer to the question: “where did everything start from?”. 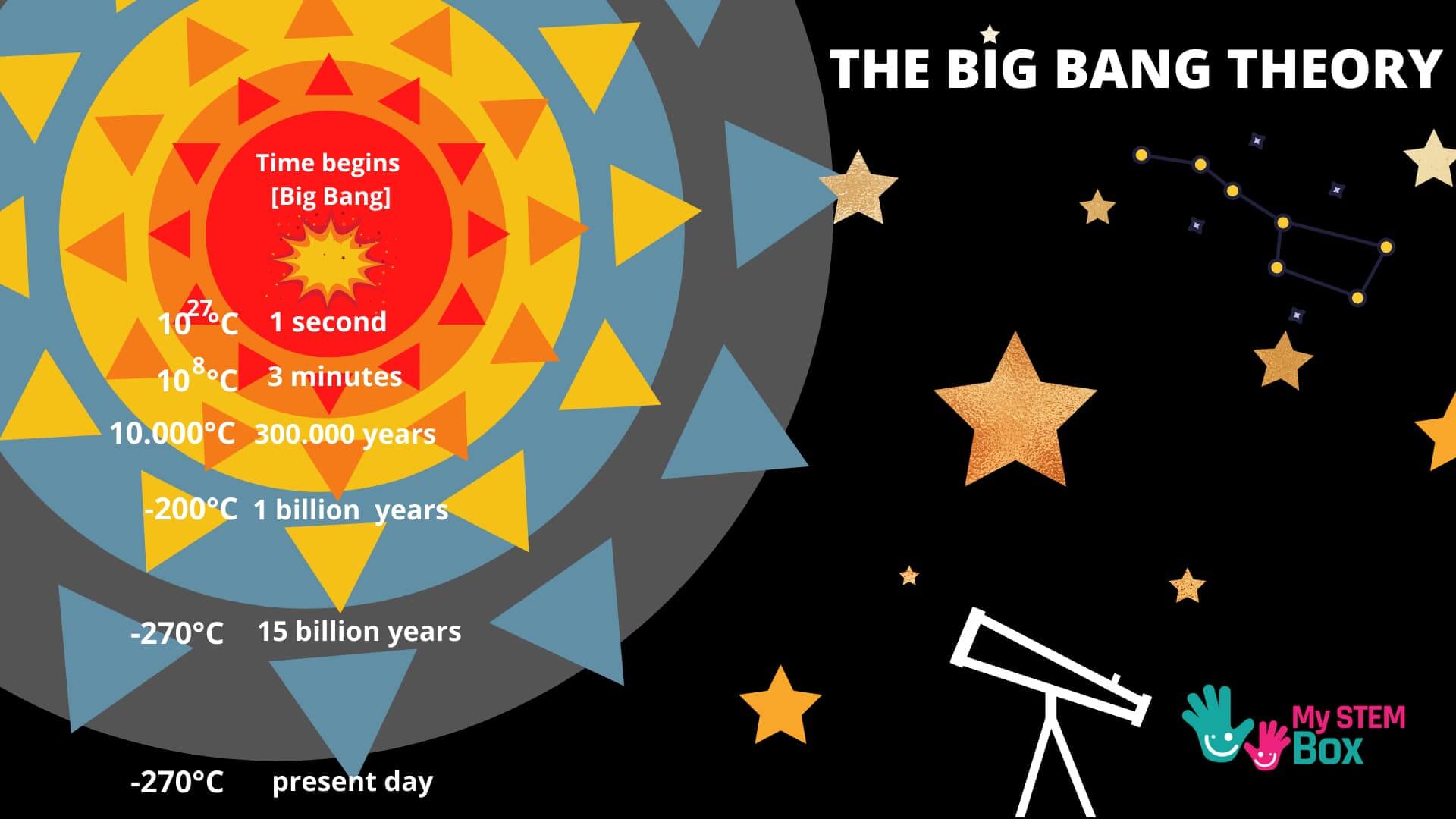 So What Is The Big Bang Theory, For Kids Explained

Around 13.8 billion years ago, there was nothing but a soup of small, dense, hot particles swirling around with energy in a space so dense that you cannot even imagine it. This hot, thick soup is known as the “primordial atom” or the “singularity.”

Then, something caused this singularity to start expanding, creating everything as it went along. In a tiny fraction of a second, this “primordial atom” grew into something bigger than a galaxy. But it didn’t stop there; it kept growing and growing.

To imagine how hot and fast this expansion was, let me give you an example: a hydrogen bomb (one of the most powerful nuclear weapons that we have) lets out about 100 million degrees of heat, and the particles in the bomb move at about 300 m/s.

Now imagine ten million such H-bombs (source) whose particles are moving a million times faster. That’s the Big Bang for you.

Pure energy changed into what we see as matter today (and something known as anti-matter too). Matter and anti-matter collided with each other, canceling themselves out. Some matter particles survived these reactions, and they formed the initial atoms that created stabler particles like protons and neutrons. This conversion happened when the universe was not even a second old!

Over three more minutes, the super-hot initial universe started cooling down, just enough so that the early particles could come together, creating nuclei.

The most basic nucleus, which has just one proton and one neutron, is Hydrogen. The second simplest atom is that of Helium (it has two protons). Most stars make up these two elements even today!

About 300,000 years on, electrons were born. Electrons are particles that have a charge opposite to that of protons. Electrons sticking together with nuclei formed atoms. Atoms are the building block of everything that we see today.

Hydrogen and Helium’s atoms started getting pulled to each other due to gravitational pull, thus creating the first stars and then galaxies.

So that’s the story of the “Big Bang” theory. But like I said, today, I will not be telling you a fairy tale. 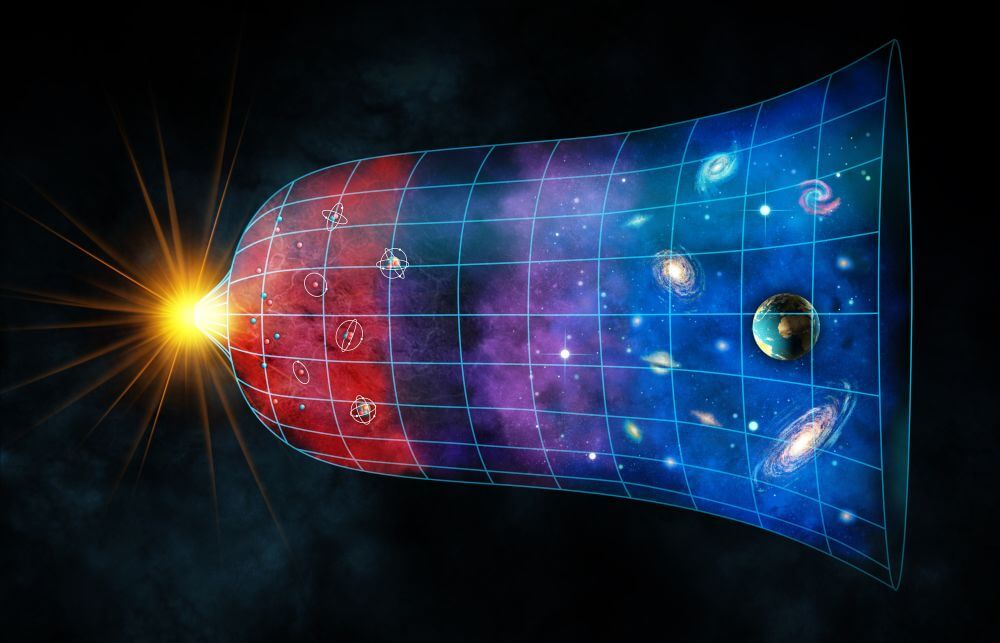 What Was There Before the Bang?

A fascinating question that a keen observer like you might ask is this: What was there before this “primordial atom”? Where did it come from? What caused it?

Well, to understand the answer, you would do well to remember that the concepts of “before” and “after” come from time itself. For example, the answer to “what did you do before breakfast?” is that if you had breakfast at 8 am, what were you doing at 7 am?

But what if there was no such thing as “time”? What if there were no “before” and “after.” The primordial atom was like that; it had no beginning or end; it just was. Time itself was born when the big bang happened, so nothing could have happened “before” it.

How Do We Know That the Big Bang Happened?

One of the earliest pieces of evidence of the Big Bang theory being correct, came just two years after noted astronomer Edwin Hubble published it (source).

Hubble observed that the radiation coming from two galaxies always seemed to have a higher redshift (difference in wavelength) when observed over time. In layman’s terms, this meant that galaxies were moving away from each other, crucial support to the Big Bang theory’s idea that the universe is still expanding.

The subsequent big evidence came from our own TV sets! Well, not exactly. Have you ever noticed that when you leave on a channel not tuned to any station, there is still noise and disturbance on it? Scientists believe that microwaves left in the universe by the Big Bang cause this disturbance (source).

Another cool way to note the aftermath of the Big Bang is to observe the radiation that is coming from gas clouds that are very far away from us. Since light takes a long time for them to reach us, what we see today is what these clouds looked like many billion years ago. And the observation is clear that they are hotter than newer gas clouds, just like the Big Bang theory predicts!

Scientists have proved the theory by measuring how much of each element exists in the universe. For example, about 74% of the universe is Hydrogen, while 25% is Helium (source). The rest of the ingredients, like Carbon and Oxygen, are less than 1%! This composition of matter could only have happened if the universe began as a hot dense “primordial egg,” just like the Big Bang theory predicts.

The Big Bang theory answers some fundamental questions about where we come from and what is happening in the universe around us.

At the same time, it raises many new questions like: “What is the fundamental nature of our universe?”, “What particles existed immediately after the Big Bang?”, and “What other dimensions can exist apart from space and time?”.

But all of those answers are stories for another day. For now, “they all lived happily ever after.”