If you have ever played with blocks or Legos, you know that you can build many cool things by putting them together in different ways. Similarly, all living organisms are created of building blocks, which are put together to create different parts of the body and ultimately different animals and plants.

These building blocks of life are known as cells. In this article, let me try to explain what a cell is for kids, along with some cool facts about them.

As I explained, cells are the building blocks of life. But what are they made of? There are six main parts to a cell: 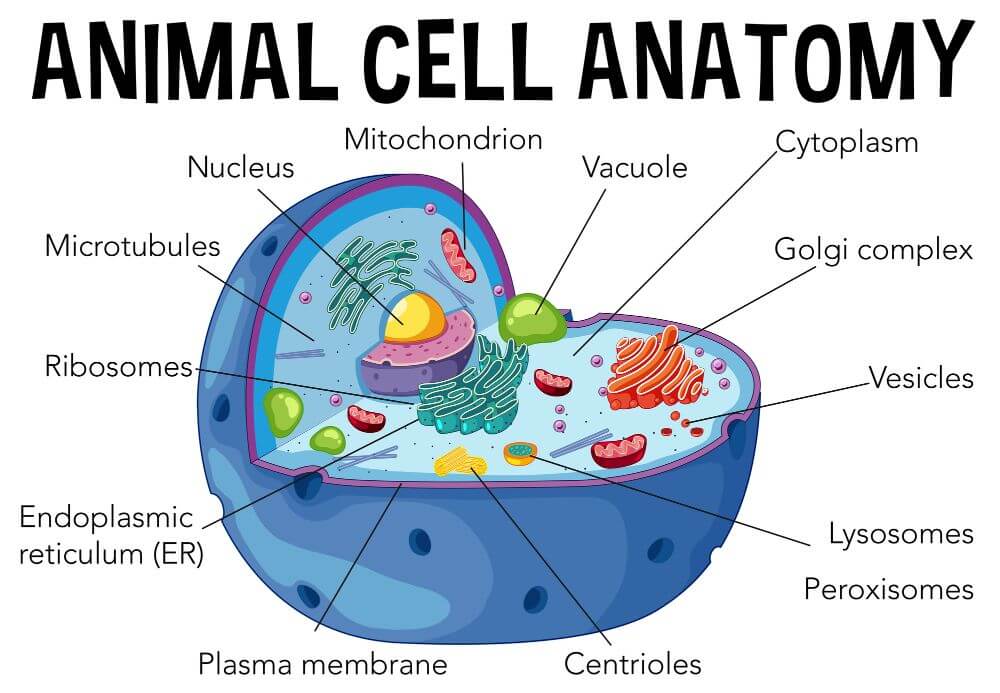 The nucleus is like the brain of a cell. It contains DNA and RNA, two very important parts of a living cell.

DNA (Deoxyribonucleic Acid) is the more famous one that you might have heard of in movies like Jurassic Park (dinosaur DNA) and X-Men (Mutant DNA). It is like the operating system of a cell; it holds all information about what it is supposed to do and which part of the body it is supposed to become.

The lesser-known RNA (Ribonucleic acid) is the twin brother of DNA. It translates the information inside the DNA and carries it outside the nucleus, conveying it to the other cell parts.

The cell membrane is the outer protective layer of the cell, which gives it shape, protects it from things outside while also ensuring that the cell receives nourishment. It’s made of fats and proteins.

The cytoplasm is a jelly-like substance that fills the space between the nucleus and the cell membrane. It holds together different parts of the cell.

No cell can work without energy (pun intended). Mitochondria are the part of the cell in charge of producing energy by burning the digested food in oxygen.

Ribosomes contain RNA and help to create protein for the cell.

A functioning system cannot work with waste material strewn all over the place. Lysosomes make sure that the cell is clean and free of unwanted waste.

Golgi apparatus is a set of stacked membranes that help package lipids and proteins bound out of the cell.

What Are the Types of Cells?

Cells can be of two types: Unicellular or Multicellular.

Unicellular means single-celled. If you have ever hatched an unfertilized chicken egg, you have seen a unicellular cell. 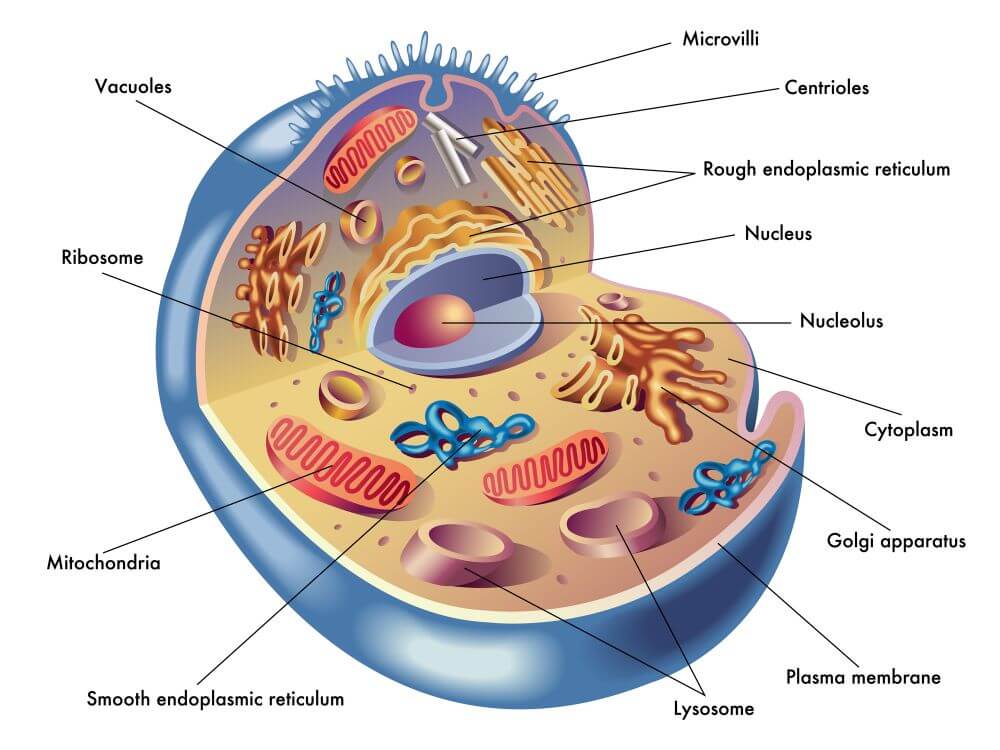 How Cells Created You!

All life starts unicellular but then goes on to become multicellular. You, too, started as a single cell in your mommy’s belly. That single cell started to reproduce by dividing itself in a process known as mitosis.

Over time, you added more cells to yourself, forming a protective layer around this bunch of cells. At this stage, you were known as a Blastocyst.

The cells inside the blastocyst grew and grew, eventually becoming an embryo. By the fifth week, since that first cell started, organs start forming.

Some cells take up the job of becoming your kidneys, others your nerves and arteries, your brain, your spinal cord, and some became your heart.

You grew bigger and stronger until about forty weeks out. You became fully grown, ready to be born as a baby! Isn’t that incredible!

Plants are also living things, and just like animals and humans, they are also composed of cells.

However, there is one very important difference between plants and animals – plants can make their food using sunlight!

Everything you have eaten or will ever eat is either a plant or an animal fed off a plant. Therefore, the source of all food is plants.

There are two additional layers in a plant cell: the cell wall and chloroplasts. 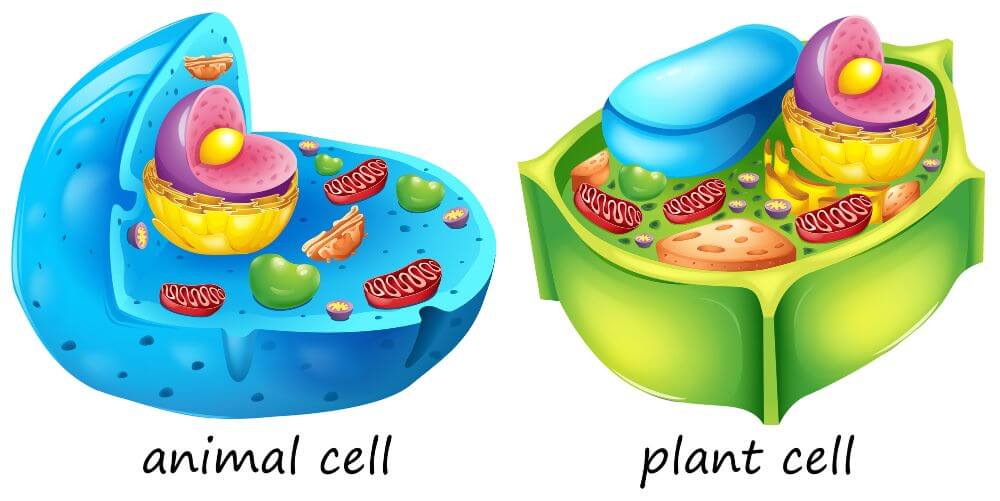 Plant cells have an additional protective layer outside the cell membrane, namely the cell wall. The cell wall is a layer that supports the cell, gives it a rigid rectangular shape, and supports what goes in and out of the plant cell.

Chloroplasts are the real miracle of nature. They use photosynthesis to produce sugar molecules by using the energy from the sunlight they receive. In this article, we talk about photosynthesis and how plants breathe.

Differences Between Plant and Animal Cells

There are four main differences:

You might have heard about stem cells on TV or read about them on the internet. Stem cells are a very important area of research, a promising cure to some types of cancer, and a method to create body parts like kidneys, livers, and lungs for those who need them.

The idea is that a stem cell is like a universal cell, which can be grown to become anything. You might remember that I mentioned earlier that it’s only after about five weeks that cells start taking on specific functions.

Stem cells are usually formed in the bone marrow, or they might also be inside the umbilical cord that connects the mother to the child during pregnancy for food and nutrition.

Stem cell banking aims to store your cord blood to maintain these stem cells so that they could be made available to you in the future if the need arises and there is a disease that can be cured by using them.

How Do Plants Breathe?

Why Do Leaves Change Color in the Fall [Answers]?